This past Friday, April 11th, 2014, the APEX Cares volunteer network came out to help with logistics for the “Reaching New Heights” 21st CAUSE dinner. Center for Asian Americans United for Self Empowerment (CAUSE) founding member Charlie Woo was joined by over 50 elected officials to jointly recognize pioneering corporate and social leaders. This historic event comprised the largest convening of API representatives in the history of the United States. Our own Thomas Wong, Jacqueline Wu and Olivia Lee were among the youngest attendees recognized for their public service.

There is a strong synergy between the mission and history of APEX and CAUSE. Both founded in 1993, each organization has strengthened the API and wider Southern Californian communities and served as a springboard to advance young API into higher ranks of leadership. The outpouring of gratitude for CAUSE and its key supporters–which helped sustain a greater vision for the API community through starker times–was a necessary reminder that until the 1990s there wasn’t a single API voice in the legislature. It has been the unwavering work of organizations like CAUSE and APEX which helped cultivate this commitment to community-building through civic engagement.

Congresswoman from New York’s 6th congressional district and CAUSE honoree, Grace Meng, marveled at the strength and solidarity of Asian Americans in California with good-natured humor, and commended CAUSE, saying, “Your work is vitally important to the API community… We are running out of time to develop our younger generation.” CAUSE honoree Michelle Kwan, public diplomacy envoy and America’s most decorated figure skater, said, “I believe in this organization that is empowering people to empower themselves!” Executive Director of CAUSE, Carrie Gan, paid tribute to the inspiration that Kwan gave a generation by saying, “Michelle Kwan embodies the epitome of the dream of immigrant families.” 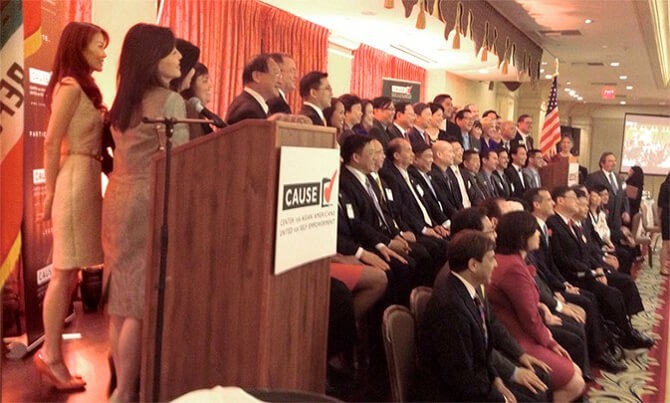 The evening captured a resounding sense of pride in perpetuating the democratic values that continue to build a stronger and more resilient America. California Congressman Ed Royce of the 39th district said, “The people gathered here in this room are the bridge between the U.S. and Asia.” In his acceptance speech, California State Senator Ted Lieu from the 28th district and CAUSE honoree said, “For 21 years CAUSE has helped to empower the community and diversify the legislature.” There is no denying our increasing economic and cultural interdependence on the Pacific Asian region, and organizations like CAUSE and APEX are ensuring that the upcoming generations make an impact not only for API, but for society at large.

Congresswoman Judy Chu of California’s 27th congressional district and first Chinese American woman elected to congress said triumphantly, “Today, the API Caucus has 11 members; the highest in history!” Assemblyman for the 49th district, Ed Chau, rallied by adding, “The API community is at a tipping point in terms of increasing political engagement.” The evening’s keynote speaker, Los Angeles Mayor Eric Garcetti, gave unequivocal praise, saying: ”CAUSE interns are literally changing not only the face of politics, but the face of this nation. Mayors come and go, but Charlie Woo and CAUSE stay.”

It was an evening filled with spectacular speeches and brushes with legendary figures in the world of business and politics. For me personally, the most memorable aspect of the night was working side-by-side with the ever-inspiring group of APEX volunteers, accomplished CAUSE staff and a brilliant and ambitious cohort of CAUSE leadership Fellows. It goes without saying that the achievements of the distinguished trailblazers honored that evening will be commemorated for years to come; but I trust those very same leaders would share my excitement to see the passion and promise of these up-and-coming leaders. CAUSE and APEX are eagerly taking up the torch and working in parallel to the enrich this legacy. Carrie Gan, shared this sentiment saying, “It was such a pleasure to have all the APEX Cares volunteers there in full force. I look forward to our continued partnership.”