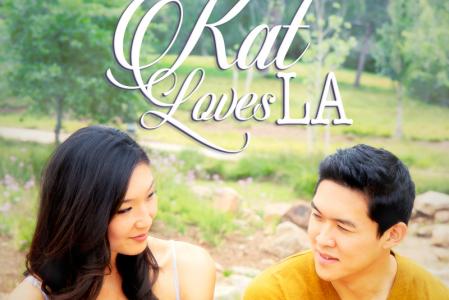 APEX had the opportunity to learn more about the entertainment industry through the Asian American lens of Paget Kagy, actress, writer, and producer of Kat Loves LA. Read on to find out about her career path and how her culture has informed her thoughts and her work.

1. Can you tell us a little bit about your professional background, and your path to what you currently do?

I’m an actress/writer/producer who recently produced the first season of an Asian American romantic comedy “Kat Loves LA” that’s gained quite a bit of accolade from within the industry and 150K+ views on Youtube. I also work in digital advertising, which surprisingly, has been helpful in producing. I believe the most important skill that any professional can cultivate is being able to effectively communicate (written and verbal). When you’re working in the corporate world, that’s a skill that most effective professionals are forced to develop, but not as much in the creative world.

When I first entered the entertainment space, I was solely interested in acting, like with most actor-hyphenates. It was fun, creative, and freeing, and seemed so diametrically opposed to anything related to business. However, when you are strapped for budget and committed to seeing a project through, what do you have, but your smarts and savvy? the most important tool you can ever rely on is being able to sell. Not in the door-to-door sleazy kind of way—but in the ability to identify and present the mutual benefits to all parties involved. Selling is first seeing the opportunity, and then showing it to the other party.

2. APEX is always trying to foster cultural awareness amongst our members and the community. How does your culture and background inform what you do, both personally and professionally?

As an Asian American creator, there are a lot of considerations in choosing what story to tell. Do I want to make something that’s marketable? Something that stands the best chance of getting picked up by a network? Or something that speaks to me and is honest to my sensibilities and identity?

Ultimately, I chose to make this an Asian American led project, with both leads being Asian, because it was a story that I could tell earnestly, in a way that I hadn’t seen other creators do in this genre. The ultimate opportunity I saw was doing something different, not popular.

After the first season was released, the stakes seemed even higher than just challenging norms through casting. My eyes were opened up to a whole community of Asian Americans who feel disenfranchised, sold out and thrown out, by Hollywood. Releasing the first season has forced me to ask this question for this and future projects: If I have the chance to represent Asian Americans in a positive way and have been given that privilege, shouldn’t I? Don’t I, in some way, have that moral obligation?

And this is where the personal and professional meet. I have professional ambitions, but I also have a moral compass—so, how do I negotiate between the two as I progress in my career? Ultimately, I hope to be someone who can create change in this industry.

3. The intersection between the entertainment industry and Asian/Asian American community has been a hot topic. What are your thoughts on the current landscape of the industry and what do you think can still be done to improve it?

I think it’s getting better for Asian Americans in Hollywood. I know there is a lot of criticism around Crazy Rich Asians, but it’s a step in the right direction. The truth of the matter is, Hollywood sees CRA as an “Asian American” film, whether or not we wholeheartedly like or support it. In other words, if we want to encourage the wave of more Asian American content to be made, we better go watch it in theaters.

4. What advice would you give aspiring actors and actresses, producers and writers, or anyone looking to go into a career where they’re not as well-represented?

My advice to anyone of any race, or background, is to be honest about who you are and never apologize for it. It’s something I still struggle with at times. But the more you embrace your flaws and the unique traits that make you, you, you can start becoming empowered in that and finding your authentic voice. To be honest, I think that’s where a lot of new content creators fail. They are too wrapped up in trying to make their project “the next such-and-such”, or make it really clever, or really funny, that their work lacks heart. First, find your voice. Second, create.

5. What was the inspiration behind Kat Loves LA and who do you think would really resonate with the series?

To be honest, the inspiration for Season 1 was inspired from failure. I was going through a rough patch around the time I wrote the first draft, and was actively considering giving up on acting altogether.

Instead, I decided to write into that feeling of failure. I chose to focus on a time in my life when I had felt the lowest of low. I was fresh out of a relationship, stagnant in nearly all areas of my life, and living alone. “Kat Loves LA” is the story that plays in the fantasy version of my life from 6 years ago.

I hope anyone who has felt depressed or lost at any point in their lives, can relate to the basic premise of the story and feel comforted by the fact that they are not alone. I hope it will also resonate with Asian American audiences in general, as it shows a positive representation of us on screen.

6. What kind of takeaways do you hope people get from watching Kat Loves LA?

I want anyone who watches Kat Loves LA to feel less afraid, and less alone, because there are millions of others who go through the same emotionally challenging periods of their lives. But we do come through to the other side with a little will, and a little faith.

I’m also hoping to inspire other Asian American creators to go out there and tell an unapologetic Asian American story knowing that it can be done, and people will enjoy it!

7. What are you looking forward to the most as you gear up for Season 2?

I’m most looking forward to seeing it all come together on screen! I really enjoy the script and story for Season 2, as it’s a little more mature this time around. I’m also in love with some of the new characters we’re introducing and very excited to see them come to life! Please help us by donating to our Season 2. Your donation could pay for a day’s work for one of our crew members, or help feed us on set! Please check out our page for perks, industry raves, cast list, and remember that every dollar counts: https://www.indiegogo.com/projects/kat-loves-la-love-drama/x/10848366#/