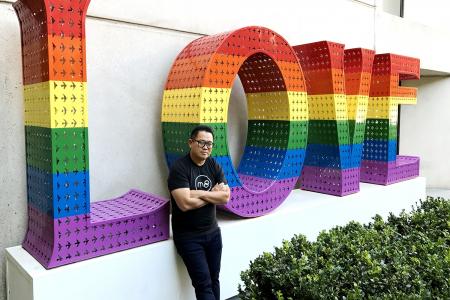 As we celebrate the 25th year in APEX this year, what better way to honor this milestone than to speak about the person who started it all. We had a chance to talk to the founder of APEX, Stephen Liu, and learn more about his inspiration and process in creating the organization, his favorite memories and involvement, and about his current venture with M8 as the current CEO of MEETM8.com. Read more to see how APEX all started!

Name and years you served as president
Hi, I’m Stephen Liu, and I served as APEX’s first President from 1993 to 1997. Since then I have served as an Ex-Officio Chairman. One of the best things I did for the organization was to step away as President allowing it grow and mature on its own. There were some years that I have been quite involved, and some that I have not. Usually, it’s depending on current leadership and if they feel they need my help. APEX will always be my “baby” but now at 25 years old, it’s grown adult now.

What was APEX like when you were president?
The early days of APEX were filled with a sense of excitement, empowerment, and hope. I don’t want to get all sentimental, but man – those were the good old days. 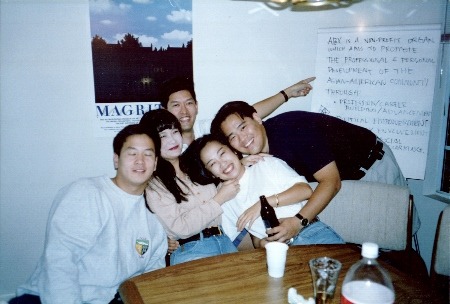 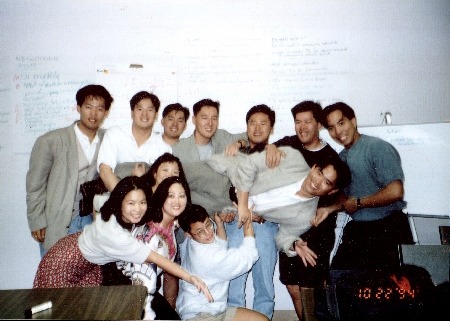 Most of us were in our early 20s, and we were still learning about leadership and trying to figure out our place within the APA landscape. That said, we had plenty of great ideas, and we were raring to go. Here are some of the things we achieved during the first several years of organization:

One event that stands out the most is our 3rd APEX Third Anniversary Awards Extravaganza – coincidentally, that was my last gala as President. This was a sold-out black-tie affair at the Biltmore Hotel, and we had over 550 people in attendance. It was a pretty huge deal because we’d secured some major corporate sponsors such as Southern California Edison, House of Seagram, Anheuser-Busch, Mars Inc., AT&T, Toshiba, and Wells Fargo Bank.

We had such a great time that night, but I also remember that we ran way, way over. We didn’t even finish the speeches and presentations until 11pm!

How did you get involved with APEX?

To cut a long story short, it was because of my softball skills. Let me explain.

I had just moved from San Diego and only knew two people in Los Angeles — my Jewish fraternity brother, and my younger sister Wendy. One weekend, my sister invited me to a “Sports Day” picnic that was organized by two optometrists — Peter Koh (Founding Membership Director) and Santi Smithsuvan (Founding Community Relations Director) in Monterey Park. There must have been a couple hundred people there; they were all young, professional and “Asian American” like me! This “Sports Day” picnic a variety of sporting activities. One of the sports was a softball game that was organized by an Air Force attorney, Victor Chen (Founding Sports Director). I hit three home runs in that game and was immediately invited by Victor to join his co-ed softball team.

This was a pivotal moment for me. I didn’t grow up in LA and really didn’t know anyone. It was here that I got to meet and bonded with people like Mike Ni (Founding VP), David Lin (Founding Corporate Relations Director), Kathy Hom (Founding Communications Director), Kerry Lin Liu (Founding Special Events Director), Sharon Yu Lin (Founding Professional Development Director), and Susan Phan Lim (Founding Administration Director). This was pretty much the core group that when on to found APEX. When it came time to vote on who would become “President” I was elected in a unanimous vote.

So how did I get involved with APEX? I hit three home runs in a softball game at a picnic.

What inspired you to create APEX?
I’ll be honest — before I started APEX, I was a real “banana”. Yellow on the outside, but white on the inside. I had mostly white friends when I was growing up in Illinois, Maryland, and San Diego. In fact, I distinctly remembered my sister Wendy having to explain to me why I should use the word “Asian American” vs “Oriental”. Yep, I was that guy.

So when I went to that fateful “Sports Day”, and met so many young Asian Americans professionals whom I felt connected with, I was blown away by the possibilities.

Here was this rapidly growing population of young Asian Americans that were, generally speaking, college-educated, ambitious, and social. After talking to them, I realized that most of these folks were involved in Asian American activities in college, but didn’t have any opportunities to do so as a young professional. Of course, I was also thinking and having conversations about what it meant to be “Asian American” in the United States. The images of the Korean shops being burned down that I saw in the news haunted me. That could’ve been my relatives. That could’ve been my people.

So APEX started with a single question:
How do we inspire, educate and motivate our generation of Asian Americans to excel and lead not only within our respective professions but within our communities as well?

From there, we spent several months thinking about what APEX could be.

One of my first brainstorming sessions was the famous Souplantation lunch with Santi Smithsuvan where we came up with the famous three pillars of APEX scribbled on a napkin. 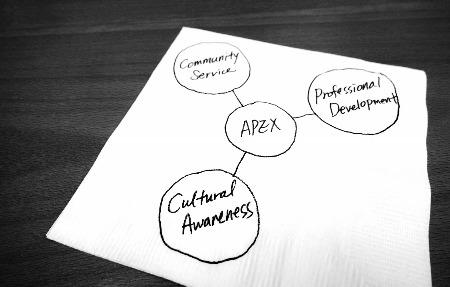 Another time I remember was that we all had Chinese lunch meeting and then went to see an afternoon screening of the biopic Dragon: The Bruce Lee Story starring our future APEX awardee Jason Scott Lee.

The movie was incredibly inspiring for all of us. Here was a major studio film that debuted number one at the box office starring a sexy six-packed Asian American male who faces and fights racism and gets the blonde girl. Only two months earlier, Jason Scott Lee was in a little critically-acclaimed film called the Map of the Human Heart, where he also plays the romantic lead and, again, he gets the white girl! Unfortunately, Hollywood wasn’t really ready for a romantic Asian male lead and has not really cast Jason in that type of role since then.

I also had numerous impromptu sessions with my founding VP Mike Ni (center in picture) who lived next door with another founder David Lin (left in picture). Mike had both a Stanford and MIT engineering degree and was very structured and really helped me to refine the vision of what we would become APEX.

Some of the design principles we came up with:

And lastly, we decided from the get-go that we would have to be not-for-profit and serve a greater good. Looking back, I think the organization has remained true to those initial thoughts. 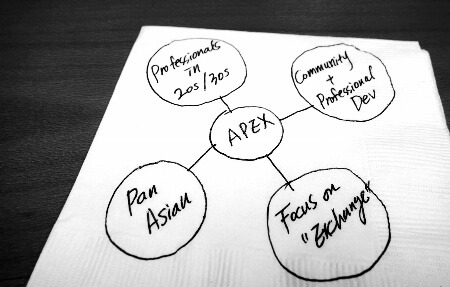 Do you have any favorite memories during your time in the organization?
Here’s something you need to realize — twenty-five years ago, the Internet wasn’t mainstream. Everything we did was offline. We used snail mail, physical flyers, and phone landlines. Check out the following diagram, which illustrates the APEX recruitment process in 1994… 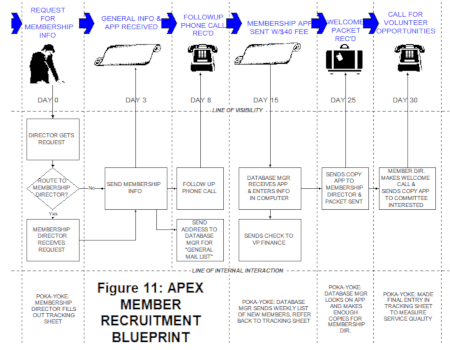 It’s almost comical how much easier it is run an organization like APEX in 2018 vs 1993, but I do have fond memories of envelope stuffing parties and telephone trees to get the word out.

Seriously, though — every time we’d get together for board meetings, but we would have to multitask and stuff envelopes or affix stamps on postcards while we talked. I even remember making membership telemarketing calls at Raymond Chang’s house in RPV. We did have a “human-computer” at our disposal. Our Director of Membership Peter “Rainman” Koh had a near photographic memory, and he memorized our entire membership roster down to their phone number and address.

Tell us more about current venture M8. How did it all start?
Ever since my APEX days, I’ve made a career connecting people for love, business, and friendship. But I wasn’t having much success when it came to dating — and for quite some time, I just couldn’t find The One. One day, I went to an event with my friend film producer Teddy Zee, who is also an APEX advisor. When I got there, I was introduced to this beautiful, driven women named Linda.

I thought we hit it off, but she said I wasn’t her type. Thankfully, Teddy gave me such a great endorsement that she decided to keep an open mind, and it turned out that was all the help I needed. We eventually got married and now have a 3-year-old son named Kingston. 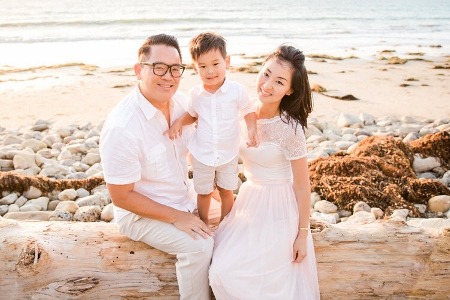 This made me realize that we all need a little help from our friends… especially when it comes to love. It’s also why Linda and I decided to create a matchmaking app where your friends are part of the magic.

At M8, we recruit and reward friends to become your “virtual wingman” who vouch and introduce their single friends – just like what Teddy did for me. We believe that real-life friend endorsements and introductions provide an important human dimension to our platform giving both you and your matches better insight into potential compatibility and a “warm intro” that establishes common ground. And by incorporating two user tracks – Dater and Matchmaker – M8 has something for everybody – whether you’re single, in a relationship, or married with kids.

Check out our app at meetm8.com, or download it via this link.